In 1831, five couples began meeting together in the home of Rev. Josiah and Sarah Trent. First Ebenezer Church was completed in 1833.  The church was called the "Ebenezer" Church after the memorial that Samuel built to honor God.

​The first Ebenezer church was located north of the current baseball field near where the school bus bard stands today.  The settlement was referred to as "Ebenezer" at that time.  The building was also utilized as the community school house.  Statehood arrived in 1836 and growth in the community and the church continued. 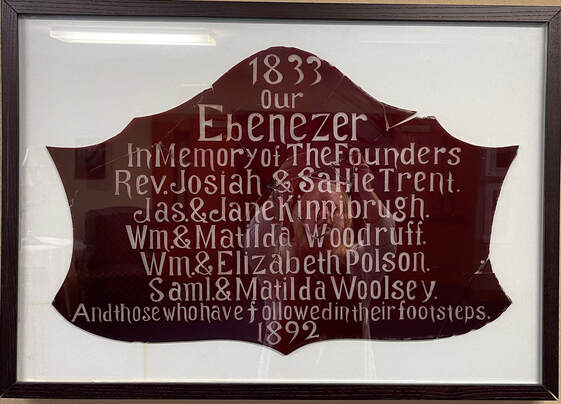 This commemorative stated glass window is now framed and displayed in the Narthex and honors our founders. It was constructed and placed in the White Street Church in 1892.
By 1848, the first Ebenezer building was too small and was in a state of disrepair.  The church began meeting in the Hawthorn School building while members constructed the second Ebenezer Church.  It was completed in 1851.  While it was still a one room structure, this church had pews with log backs and lighting that came from candles in wooden blocks attached to the walls.

The land where the second church was build was owned by the Allen family.  The sacred ground around the church grew into what has become the Farmington cemetery.  As you drive by on Double Springs Road look into the cemetery to the Trent plot.

While the clouds of the Civil War began to gather, the community grew.  Arkansas, like her southern neighbors, joined the Confederacy and seceded from the Union in 1861.  This area was the site for several battles.  Pea Ridge and Prairie Grove are well known, but there was also a battle of Fayetteville, and Union troops were stationed in Fayetteville and needed barracks.

In order to furnish lumber for these barracks, Union forces demolished almost every business, public building, and church in our little community.  The lumber was then used to construct shelters for Union troops.  The Second Ebenezer Methodist Church remained standing because of the courage and determination of Miss Sultana Trent, the teacher of the school.  Miss Trent held school every day in the building.  When many people were "lying low" in the face of the Union forces, she held classes, and the building remained intact.  It was just after the Civil War that the area was named "Farming Town."

The Third Ebenezer
About 25 years after the Civil War, time had taken its toll: the cemetery was crowded and the members of the church determined the need for another building.  During the middle of the century, W.H. Engels was an influential man and a devout Methodist in the community.  He had once remarked that there was a spot near his home where he often prayed and felt God's presence.  That special location would become the site for the third Ebenezer Methodist Church.  In 1890 the Engels family donated the land to build the new church.  The new building on White Street became known as Farmington Methodist and served as the home of our church for over 100 years. 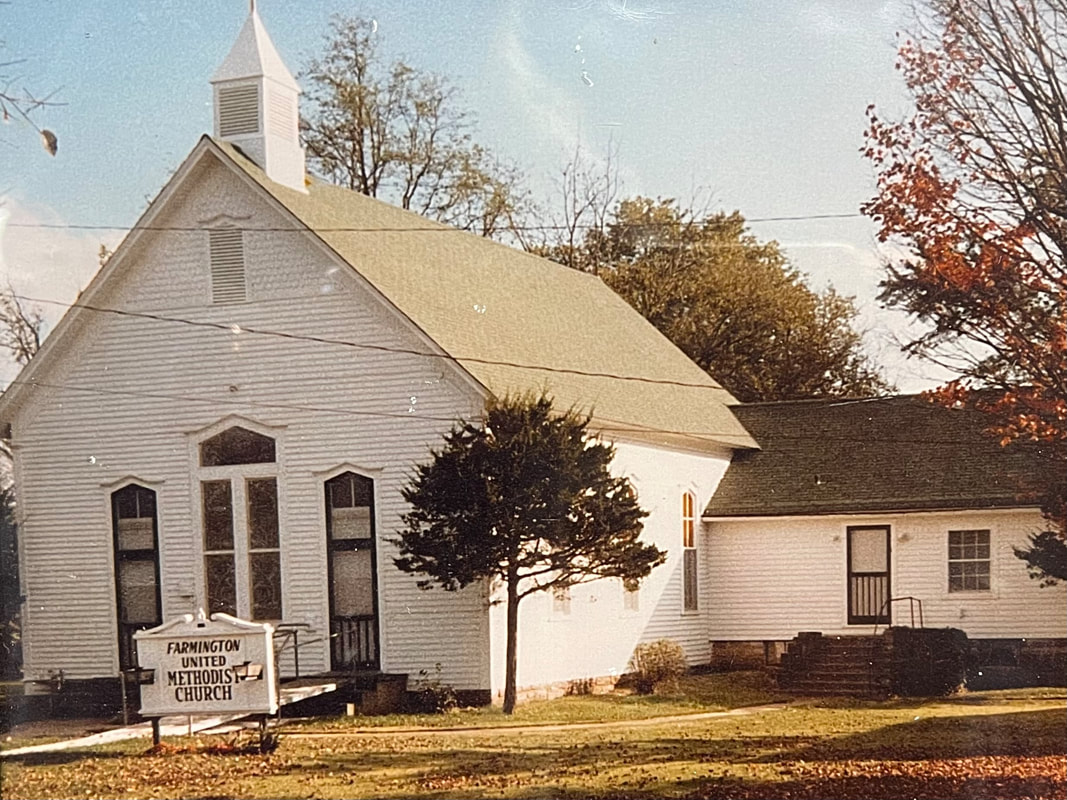 When the White Street building was completed and the first four stained glass windows were installed in 1892, the Methodist Church was the grandest and most beautiful building in the community.  The new church home had kerosene lanterns on chains that could be lowered, lighted, and then raised to give better light.  The wood heating stove was a modern one, and the wide wooden flooring planks were the finest.  The pulpit was handcrafted by the members.  In order to have comfortable pews, the women of the church hosted mush suppers and ice cream socials to purchase the needed materials.  They bought the fine pine lumber that was created into pews with arms and fine angled back rests.
The pew in the office area of our present church is one of the original pews from the White Street Church, and the pulpit in the fellowship hall dates from the 1890s.  Other special things were moved from the church on White Street to our present building and include the pendulum clock which hangs in the narthex, and the bell which sits in our present church's bell tower.
​
For 113 years, the White Street Church housed the loves, the laughter, the fellowship and the sorrows of God's people.  Church dinners were hosted under the huge shade trees that matured as the church aged.  The preachers were still circuit riders that came by periodically.  Every service the bell was rung to signal the worship of God's people in the quaint and special home.  The White Street church still is a house of worship.

​The new location was made possible from a generous gift left to the church by Russell and Clara Broyes, along with a successful capital campaign and a line of credit from the Methodist Foundation of Arkansas.  Actual construction began in September of 2002.  The new church building was designed for future growth.  For example, the side walls of the sanctuary are non-loadbearing walls and can be removed so that seating can be expanded when needed.  Land is available to build a "family life center" with additional rooms in the rear of the facility.

The White Street facility sold in October 2004 and required immediate occupancy.  The new location was not ready.  So the members packed up and moved the pews, the tables, the piano, the pulpit, the hymnals and the Bibles into the back of trailers and set up a temporary church in Brian Weaver's garage workshop.  The faith and fellowship continued as the people worshiped God in this strange setting until the new church was completed in December of 2004.
The first services in the new facility were held on December 12, 2004.  The people rejoiced together.  The church was a gift that faith and courage had helped to build with God's help.